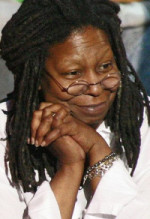 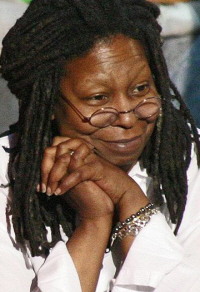 Whoopi Goldberg was born Caryn Elaine Johnson in the Chelsea section of Manhattan on November 13, 1955.  She worked in a funeral parlor and as a bricklayer while taking small parts on Broadway.  She moved to California and worked with improv groups, including Spontaneous Combustion, and developed her skills as a stand-up comedienne.  She is dyslexic, and dropped out of high school and became addicted to heroin.  She ended up marrying her drug counselor. She cleaned up and later divorced him. In 1974, she moved to California and helped found the San Diego Repertory Company, where she used the name, Whoopi Cushion. Before making it as an actress, she worked as a bank teller, a bricklayer and in a mortuary. She is one of only 10 individuals who have won an Emmy, a Grammy, an Oscar and a Tony Award (counting Daytime Emmy Awards).  “Nobody ever encouraged me in this business. I encouraged myself. I was a very dull and shy child. I was the last person you would expect to be a success in this business. But I always felt if I kept going something would happen. But I even surprised myself at times. When I was doing ensemble theater and comedy work, I felt I had some talents. But when I started doing my shows in Berkeley and found that I could be funny on my own, I was shocked.”