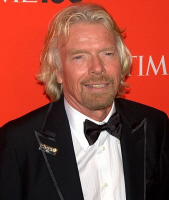 Sir Richard Branson is sending has sent his historic rocket-powered rocket plane beyond the sound barrier and his company Virgin Galactic plans to build a fleet of spaceships and begin ferrying hundreds of tourists into space in 201.  The billionaire mogul dropped out of high school at 16.

Richard Branson, who had dyslexia, was a lousy student. He dropped out at 16 to start a magazine. To fund the publication, he also started a mail-order record business; the venture grew into Virgin Records. He took a risk by signing a raucous band called the Sex Pistols, which had already been cut from two other labels. Other hit acts followed, including Boy George and Peter Gabriel.