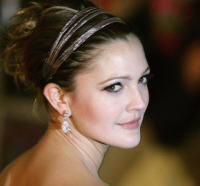 Actress Drew Barrymore, dropped out of high school, even though she is a member of the famous Barrymore family acting dynasty.  Drew starred in “E.T.” by age 7, and by age 15, she became legally emancipated and living on her own, where she left high school in the eleventh grade, years before she portrayed a reporter going undercover as a high school student in 1999’s “Never Been Kissed.”