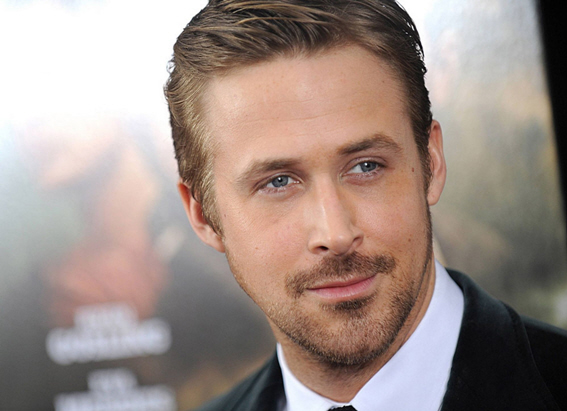 Ryan Thomas Gosling was born in London, Ontario, to Thomas Ray Gosling, a traveling salesman for a paper mill, and Donna, a secretary who qualified as a high school teacher in 2011.  His father is of English, Scottish, and French Canadian descent; Ryan’s great-great grandfather, George Edward Gosling, was born in Paddington, London, England. Gosling’s parents were Mormons, and Gosling has said that the religion influenced every aspect of their lives.   Because of his father’s work, they “moved around a lot” and Gosling lived in both Cornwall, Ontario, and Burlington, Ontario.  His parents divorced when he was thirteen, and he and his older sister Mandi lived with their mother, an experience Gosling has credited with programming him “to think like a girl”.

He dropped out of high school at the age of seventeen to focus on his acting career.  But first, Gosling was educated at Gladstone Public School,  Cornwall Collegiate and Vocational School and Lester B. Pearson High School.  As a child, he watched Dick Tracy and was inspired to become an actor.  He “hated” being a child, was bullied in elementary school and had no friends until he was “14 or 15”.  In the first grade, having been heavily influenced by the action film First Blood, he took steak knives to school and threw them at other children during recess. This incident led to a suspension.  He was unable to read and was diagnosed with attention deficit hyperactivity disorder (ADHD), prescribed Ritalin, and placed in a class for special-needs students.  Consequently, his mother quit her job and homeschooled him for a year.  Gosling has said that homeschooling gave him “a sense of autonomy that I’ve never really lost”.  Gosling performed from an early age. He showed interest in performing when his sister was a performer.

He and his sister sang together at weddings; he performed with Elvis Perry, his uncle’s Elvis Presley tribute act, and was involved with a local ballet company.  Performing boosted his self-confidence as it was the only thing he received praise for. He developed an idiosyncratic accent because, as a child, he thought having a Canadian accent did not sound “tough”.  He began to model his accent on that of Marlon Brando.