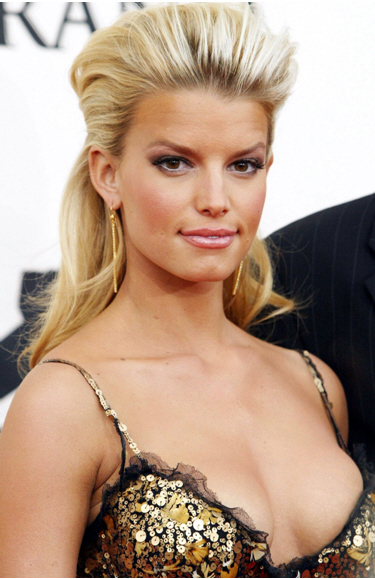 Jessica Simpson began singing at a local Baptist church, where her father also worked as the congregation’s youth minister.  At age twelve, she unsuccessfully auditioned for The Mickey Mouse Club.   Simpson has stated that they were put in groups and had acting and vocal coaches to help them.

According to Jessica, Justin Timberlake was in a group with her.  She explained that she had frozen after getting on stage to sing, and later commented that she had felt “intimidated” by the other performers.  The following year, Simpson attended a church camp, where she sang Dolly Parton’s “I Will Always Love You” and an arrangement of “Amazing Grace”.  At the camp, she was introduced to the founder of Proclaim Records, a minor Gospel music record label.  She recorded an album, Jessica, but she was dismissed from the label when it went bankrupt. Jessica was never officially released except for a small pressing funded by her grandmother.

When Simpson was sixteen years old, Columbia Records executive Tommy Mottola heard Jessica. Mottola was impressed with Simpson’s musical talent and skill. Simpson was immediately signed to the label. She dropped out of J. J. Pearce High School but later earned her GED.

Jessica Ann Simpson was born July 10, 1980, in Abilene, Texas, to Joe Simpson, a minister and psychologist, and Tina Ann (Drew) Simpson.  She has one younger sister named Ashlee, who is also a singer.  Simpson’s father gave her a purity ring at the age of 12, and Simpson has often stated she remained a virgin until marriage.  Her parents were married in 1978 and filed for divorce in 2012.  Their divorce was finalized in 2013.  Simpson has stated that she grew up in Dallas, but her parents now live in McGregor, Texas.