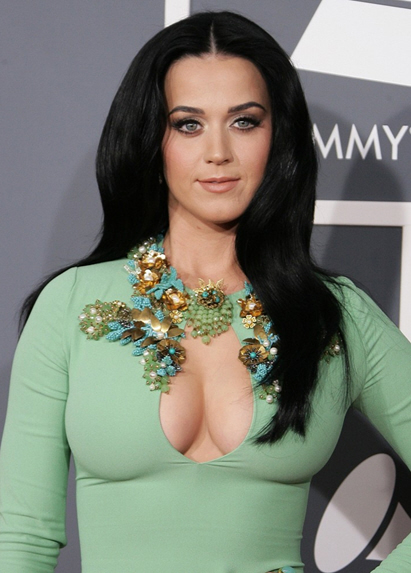 Katy Perry during her freshman year of high school, Perry completed her General Educational Development (GED) requirements at age 15, and left Dos Pueblos High School to pursue a musical career. She briefly studied Italian opera at the Music Academy of the West in Santa Barbara. Her singing caught the attention of rock artists Steve Thomas and Jennifer Knapp from Nashville, Tennessee, who brought her there to improve her writing skills.  In Nashville, she started recording demos and learned how to write songs and play guitar.  After signing with Red Hill Records, Perry recorded her debut album, a gospel record titled Katy Hudson. The album was released on March 6, 2001, and she joined The Strangely Normal Tour to support it.  Katy Hudson received positive reviews from critics, though was commercially unsuccessful and sold an estimated 200 copies before the label ceased operations in December.  Transitioning from gospel music to secular music, Perry started writing songs with producer Glen Ballard, and moved to Los Angeles at age 17.  In 2003, she briefly performed as Katheryn Perry to avoid confusion with actress Kate Hudson. She later adopted the stage name Katy Perry, using her mother’s maiden name.

Katheryn Elizabeth Hudson was born in Santa Barbara, California, to Pentecostal pastors Maurice Keith Hudson and Mary Christine Perry.  Her parents are born again Christians, each having turned to God after a “wild youth”.  Perry has Portuguese, German, Irish, and English ancestry.  Through her mother, she is a niece of film director and producer Frank Perry.  She has a younger brother named David, who is a singer, and an older sister, Angela.  From ages 3 to 11, Perry often moved across the country as her parents set up churches before settling again in Santa Barbara. Growing up, she attended religious schools and camps, including Paradise Valley Christian School in Arizona and Santa Barbara Christian School in California during her elementary years.  Her family struggled financially, sometimes using food stamps and eating from the food bank intended to feed the congregation at her parents’ church.