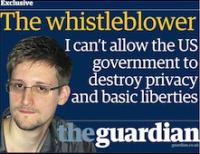 Edward Joseph Snowden (born June 21, 1983) is an American former technical contractor and Central Intelligence Agency (CIA) employee, who worked as a contractor for the National Security Agency (NSA) before disclosing details of a classified NSA spy program to the press. Snowden released classified material on top-secret NSA programs including the PRISM surveillance program to The Guardian and The Washington Post in June 2013.

Snowden said his disclosure of PRISM and FISA orders related to NSA data capture efforts was an effort to expose what he believes is excessive government surveillance of the American people. He traveled to Hong Kong before the disclosure was publicized, expressing hope of eventually being granted asylum in a country such as Iceland.

By 1999, Snowden had moved with his family to Ellicott City, Maryland, where he studied computing at Anne Arundel Community College in order to gain the credits necessary to obtain a high school diploma, but he didn’t complete the course and later obtained his GED.