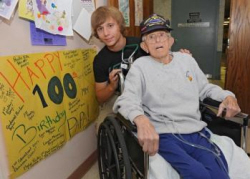 A 100-year-old man in upstate New York is finally getting his high school diploma this weekend along with his 19-year-old great-grandson.

George Hulka Jr., of Saratoga Springs, is an Army veteran of World War II. He made it as far as eighth grade at his one-room schoolhouse in the 1920s. He left to work on the family’s dairy farm.

He was drafted ahead of Pearl Harbor in 1941 and fought as a rifleman in the 9th Division, nicknamed the “Old Reliables,” from North Africa to Germany. He received a bronze star for his service, but he never finished school.

Today Hulka is recovering from a broken leg at The Wesley Community nursing home.

On June 28, his great-grandson Devin Stark will pick up Hulka’s diploma, along with his own, at his graduation ceremony.

The Schuylerville School District is giving him an honorary diploma as part of a state program, “Operation Recognition,” which allows World War II, Korean War and Vietnam War veterans to receive diplomas despite not finishing school.

During the war, Hulka fought in Algeria-French Morocco, Tunisia, and Sicily before he landed on Utah Beach on D-Day.

“It was hell,” Hulka told the Albany Times Union. “I got out of a landing craft and ran like hell, ducking and jumping over bodies and all the things that go with war.”

He fought through northern France into central Europe and the Rhineland. During that time he contracted malaria and lost some of his hearing when a bomb exploded nearby.

“We just kept going,” he said.

He returned to New York and started a family. His wife of 64 years, Shirley Hulka, died in 2010. The couple had four children together.

Today his great-grandson lives on the farm where he grew up.

“He’s a very amazing man for what he did,” Stark said.

Hulka, who turned 100 in April 2014, is one of six veterans to receive a diploma from Schuylerville schools.