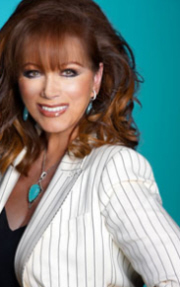 Jacqueline Jill “Jackie” Collins OBE (born 4 October 1937) is an English novelist. She has written 29 novels, all of which have appeared on The New York Times bestsellers list. In total, her books have sold over 500 million copies and have been translated into 40 languages.  Eight of her novels have been adapted for the screen, either as films or television mini-series. She is the younger sister of actress Joan Collins.

Collins was born in Hampstead, London in 1937, the younger daughter of Elsa Bessant and Joseph William Collins (died 1988), a theatrical agent whose clients included Shirley Bassey, The Beatles and Tom Jones.  Collins’ South African-born father was Jewishand her British mother was Anglican.  A middle child, Collins has an elder sister, actress Joan Collins (b. 1933) and a younger brother, Bill (b. 1946).

Collins attended Francis Holland School, an independent day school for girls in London.  She was expelled from the school at age 15; after which she threw her school uniform into the Thames.  For a brief period Jackie also was a stage singer and appeared alongside a very young Des O’Connor when they both featured in the billing for Lonnie Donegan on his UK tour about 1958. During this period she reportedly had a brief affair with Marlon Brando, who was 29 at the time.