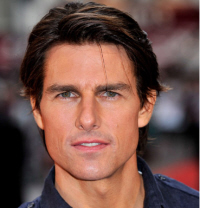 Tom Cruise, his mother and three sisters all suffered from dyslexia, which made academic success difficult for him. At age 14, Cruise enrolled in a Franciscan seminary with thoughts of becoming a priest, but he left after a year. When he was 16, a teacher encouraged him to participate in the school’s production of the musical Guys and Dolls. He dropped out of high school

and moved to New York, struggling through audition after audition before landing an appearance in 1981’s Endless Love, starring Brooke Shields. Around this same time, he snagged a small role in the military school drama Taps (1981), co-starring Sean Penn.