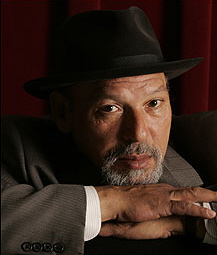 August Wilson was the only African-American student at the Central Catholic High School in 1959 where he was soon driven away by threats and abuse.  He then attended Connelley Vocational High School, but found the curriculum unchallenging.  He dropped out of Gladstone High School in the 10th grade in 1960 after his teacher accused him of plagiarizing a 20-page paper he wrote on Napoleon I of France.

Wilson hid his decision from his mother because he did not want to disappoint her. At the age of 16, he began working menial jobs and that allowed him to meet a wide variety of people, some of whom he later based his characters on, such as Sam in The Janitor (1985).

August Wilson (April 27, 1945 – October 2, 2005) was an American playwright whose work included a series of ten plays, The Pittsburgh Cycle, for which he received two Pulitzer Prizes for Drama. Each is set in a different decade, depicting the comic and tragic aspects of the African-American experience in the twentieth century.