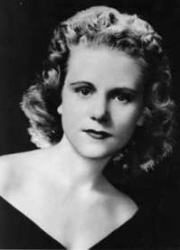 Viola Fauver Gregg Liuzzo was a Unitarian Universalist civil rights activist from Michigan, who was murdered by Ku Klux Klan members after the 1965 Selma to Montgomery marches in Alabama. One of the Klansmen in the car from which the shots were fired was a Federal Bureau of Investigation (FBI) informant

After just one year of high school, she dropped out, was married in 1941 at 16, then divorced within a year.  In 1943, she married George Argyris. They had two children, Penny and Evangeline Mary, and divorced in 1949.  She later married Anthony Liuzzo, a Teamsters union business agent.  They had three children: Tommy, Anthony, Jr., and Sally.

Viola Gregg was born in California, Pennsylvania, and moved with her family to Chattanooga, Tennessee at the age of six.  Liuzzo was horrified by the images of the aborted march on March 7, 1965 at the Edmund Pettus Bridge which became known as “Bloody Sunday.” Nine days later, she took part in a protest at Wayne State. She then called her husband to tell him she would be traveling to Selma, saying that the struggle “was everybody’s fight.”

After the march concluded on March 25, Liuzzo, assisted by Leroy Moton, a 19-year-old African American, helped drive local marchers to African American colleges and to their homes in her 1963 Oldsmobile. As they were driving along Route 80, a car tried to force them off the road. A car with four Klan members then pulled up alongside Liuzzo’s car and shot directly at her, hitting her twice in the head, killing her instantly. Her car veered into a ditch and crashed into a fence.